The new RPM 25W Pods features a corporate-style clean design with a set of the most essential technical features and a compact cigarette orientation.

The RPM 25W Pod was presented in an unusual number of design options from manufacturer SMOK at launch, including just four classic colors.

The battery pack frame of the subsystem is made of metal alloy, and for better ergonomics, a leather insert is provided on the back of the device.

Technically, the novelty is equipped with a built-in battery with a capacity of 900 mAh. To charge the battery, use a USB Type-C cable and a maximum current of up to 0.87 A.

The bad function of the battery pack is controlled via buttons and a monochrome display. The device operates in the output power range of 5-25 watts.

In addition, a separate tightening adjustment mechanism is provided. The complete pod cartridge supports the branded LP1 series of vaporizers with side fill and 2ml reservoir.

Vaporesso also has a “similar fate.” It hasn’t officially debuted yet, and it continues the tradition of the company’s most famous product line, and once again capitalizes on the development of its outstanding ancestors –Vaporesso XROS Nano Pod kit.

In fact, we are only dealing with a new case-most TX just repeat the “mini” version. Therefore, the now-famous XROS has armed itself with a compact box that is almost a cube, and has added a “nano” postscript to the name.

I must admit that the stated size is very moderate, which guarantees the invisible components of the series. The starting palette of the skin is not bad, but obviously it will be expanded after the official release, and it is likely to increase significantly.

The capacity of the pod cartridge is not the most enviable; the liquid level can still be controlled. As you remember, fueling is the most important thing-enough to “break” the flat mouthpiece. Below it is a medium-sized filling hole covered with a slotted silicone plug.

The evaporator is built-in, which is why there will be two copies in the kit at the same time. In general, there is nothing to say here-they were borrowed from the two predecessors.

But, just like SSS leak-proof technology. Fully adjusting the strength of the puff has also become a delightful tradition here. We again see a neat slider, the last one is located in front of the box.

As before, the novelty is activated by tightening. The charge level of the built-in battery has an LED indicator-this time it is made in the form of a “light strip”.

The battery is “united together” in terms of capacity and has the same name as the postscript mini-quite a good value. And the charging current is not slow-fairly average. The connectors used for these purposes are naturally a new Vaporesso design.

The Justfog Better Than e-cigarette is a 420mAh pod mod with a built-in 1.0ohm resistor. It also has automatic shooting and numerous protection functions.

The battery’s remaining power indicator has a boost mode, which can boost the voltage to 3.8V. The Better Than Pod Battery uses a constant voltage to continuously maintain flavor and steam production, despite the remaining power.

The appearance of the device is very unpretentious-so in this context, the chosen name looks a bit strange. However, let us not judge by clothes-perhaps the “most interesting” is hidden inside. The plastic housing is decorated with “special” windows for fluid control.

Otherwise, this is the most common rod-shaped cabin, and its dimensions are stated without regard to the cartridge. Even so, the device seems to be of medium size.

A detachable cartridge of almost standard capacity, although it is side-filled, cannot be accessed quickly. The mouthpiece is easily flattened and the vaporizer is built-in. No airflow adjustment-this may be the established tradition of the brand.

It has an electronic juice capacity of 1.9 ml with a side filling system. Better Than Pod Vape Kit is compatible with a 1.0 ohm OCC bottom coil, bringing you the best e-cigarette experience. Multiple protections also support long life and durable use.

The first item on the agenda was a copy from the company Demon Killer, which, as you recall, specializes mainly in circling products. However, these Demon Killer Fod Pod do not disdain the production of vape iron. In their asset there are several hearths, and more recently, another instance was added to them. I plan to introduce you to him.

Probably, it is unnecessary to discuss the appearance of the Demon Killer – he will say everything for himself. Decor for a very big lover – forty small “pebbles” and one large in the center. It all looks a bit vulgar, but it is quite possible someone will like it.

In addition, the developers offer one single version – dark – it is on it that the inlay is fully revealed. A removable cartridge of standard capacity, it will be refilled on the side. Built-in evaporator of medium resistance, designed naturally for vape liquids with a high nicotine content.

Airflow adjustments, of course, no. It is possible that a large diamond in combination serves as a fire button. The LED indicator is probably also built into it. But the developers did not bother to tell us all of this.

Related pod you may like:
puff bar disposable device 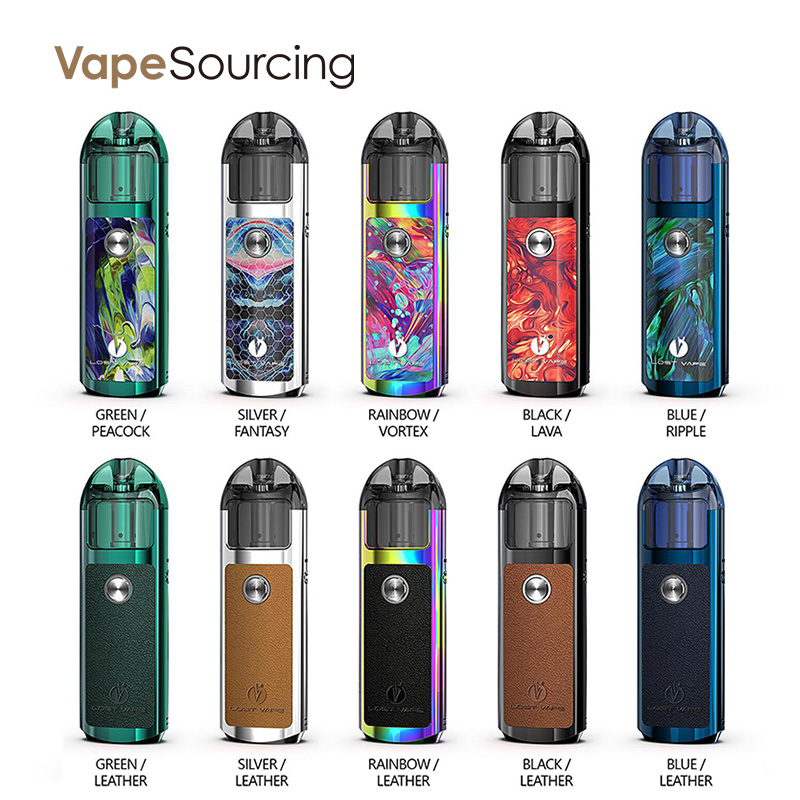 Lost Vape’s Lyra Pod Kit is a fantastic portable palm-sized vape, with the quality we expect from Lost Vape. Allows you to choose and change at will. The refilling system is a unique top-filling design, with the mouthpiece loosened to expose the double silicone plug for vape juice and coil head.

With a 1000mAh integrated rechargeable battery which is comparable with the SMOK Nord power capabilities but goes up to a max of 20W compared to the 15W of the Nord, you’ll be able to get a great, flavorful vaping experience as well as a decent lifespan before re-charging.

The 2mL pod capacity will need more consistent refilling, depending on your use but comes with the versatility of two coil options:
0.6 Ohm mesh coil for regular vape juice
1.2 Ohm nic salt coil

Complete with three power modes to tailor your vaping preference and coil power compatibility, the Lyra also comes with an LED battery life indicator and a single firing button, meaning the device is simple to use but has the variables to tailor the experience to you.

The designs come in leather or patterned ranges with the body constructed from sturdy metal with the various inlays like the Orion Q and Lost Vape Orion DNA Go pod systems and the pod is constructed from food-grade plastic with a distinctive design which shows you the liquid capacity, so you’ll never unknowingly run out.

Overall, this is a stylish, original pod system with powerful functions, good variability, small size, and can carry awesome electronic cigarettes with you. Suitable for anyone who wants simple and delicious.

Other pod we recommend:
cheap suorin air plus vape 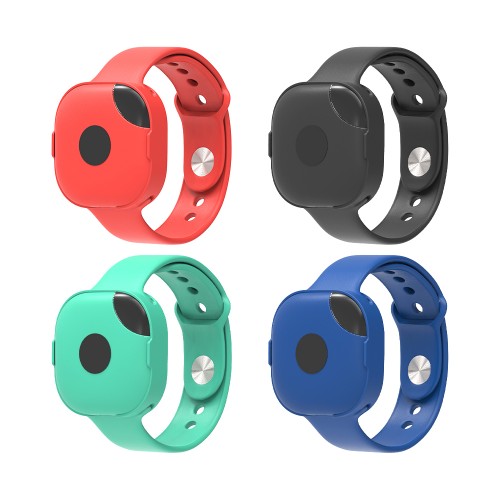 Hello, everyone. Today we bring you new notice for the ACACIA Q-Watch Vape Pod Kit, because all the colors are in stock now and you may become the early adopter. It is a brilliant watch-style vape device with 270mAh battery power that boasts the compact design.

Well, ACACIA Q-Watch vape device that features the compact design and powerful function. By using ceramic coils, you can consistently taste the best flavor and smooth airflow. On the other hand, the smart air sensing will show you the real vaping experience.

Related product you may be interested:
vladdin eden
sense orbit

We always need some portable yet long lasting vape devices when we are on the go. In the following, I’m gonna make a comparison between two MTL vape kits from Sense. Just buy from the vapesourcing online store if you like.

We first look at the Sense ORBIT TF Kit which is an intricate and detailed pod vape, combining an integrated 1100mAh rechargeable battery, 3mL capacity juice pod and features a 3-tiered adjustable power level. Built from durable zinc-alloy and PC materials, the Orbit TF is durable and can withstand light to moderate falls and drops with the reinforced chassis. 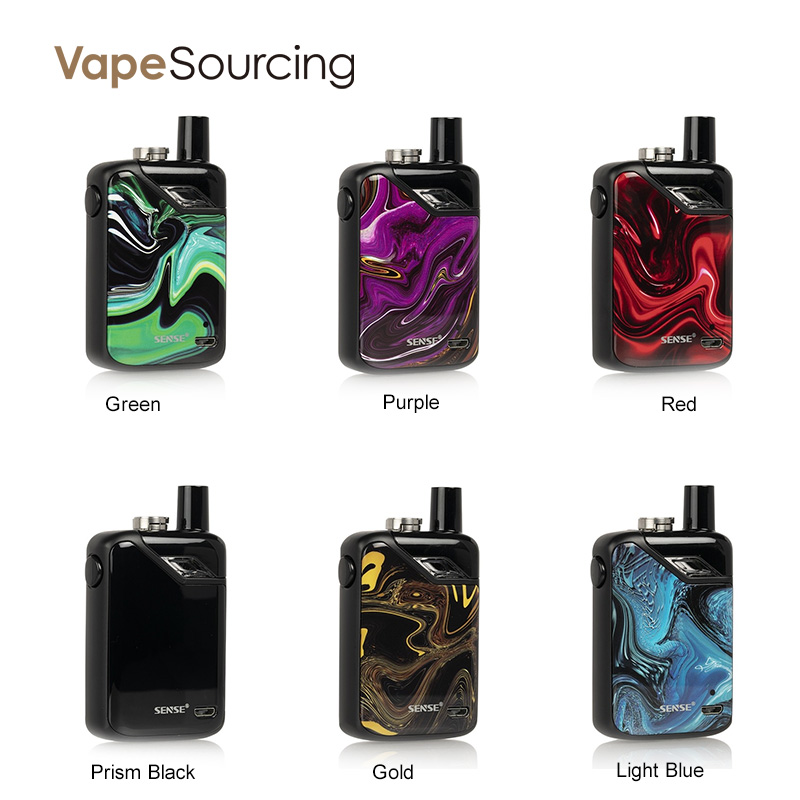 Within the housing is an integrated 1100mAh rechargeable battery designed to last the entire day without being recharged via MicroUSB port. This works in conjunction with the 3.0mL pod that is top refilled via rotating top fill system. The pod cartridge accepts coils from the Orbit TF Coil series in a plug ‘n’ play fashion, emphasizing fast and cleaner coil changes. Moreover, the Orbit TF comes with an adjustable tiered power level system that can be changed from soft, normal, or hard to accommodate the vaping style of the user.

You may like the Sense ORBIT Kit if you prefer a slender device. It is a compact and eye-catching 2.5mL capacity vape pod kit, integrating a large 1100mAh battery, a variety of firing modes and levels, and can change coils to meet the preferred draw style of the user. Constructed from durable zinc-aluminum alloy, the chassis of the ORBIT is designed to protect the precious internal systems like the integrated battery within. 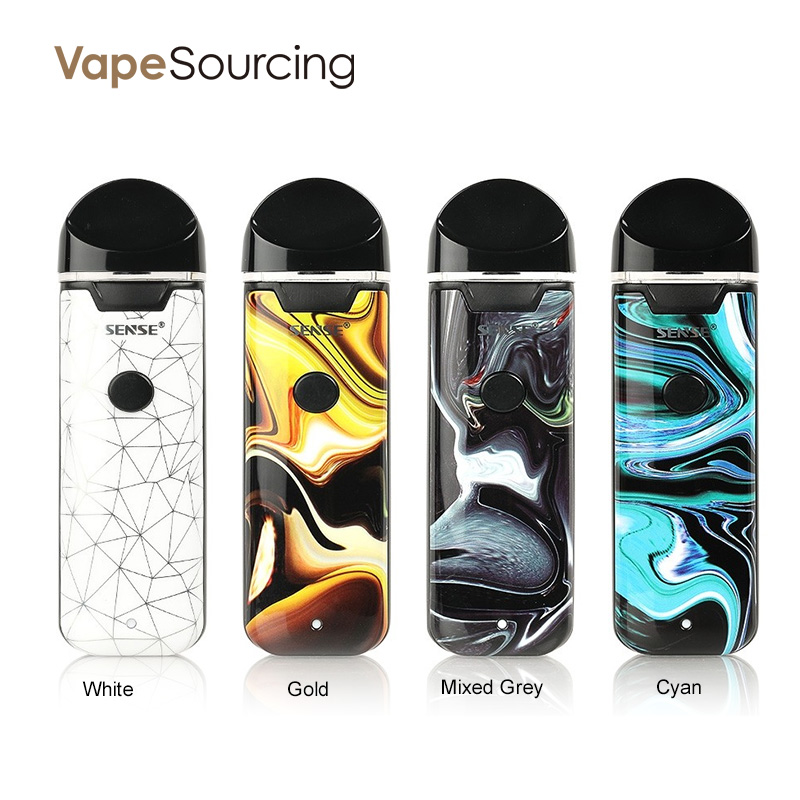 Clocking in at 1100mAh, it possesses a large 1100mAh rechargeable battery to allow for a long lasting vape system that is reliable and can be called upon for when needed the most. The ORBIT also possesses a mode changing the output level of the pod system, granting a Soft, Normal, and Hard power output to help find the suitable draw style. A 0.6 and 1.1ohm coil are offered, allowing for a mesh and regular coil option, respectively.

These days I’ve been a little hooked on two latest pod system kits. Both of them are around 15W, very perfect for my nic salts. So I decided to share them here.

Firstly let’s look at the YiHi SXmini Mi Class Kit which is a portable and luxury pod system device. Constructed of Stainless Steel material, it’s very durable to use and the exquisite paisley design will provide a comfortable hand feel. Powered by a 400mAh built-in battery and YiHi’s latest SX290 chipset, the Mi Class is capable of a wattage range of about 7 to 13W. The micro USB charging port locates at the bottom of the device alongside a reset button for any troubleshooting. 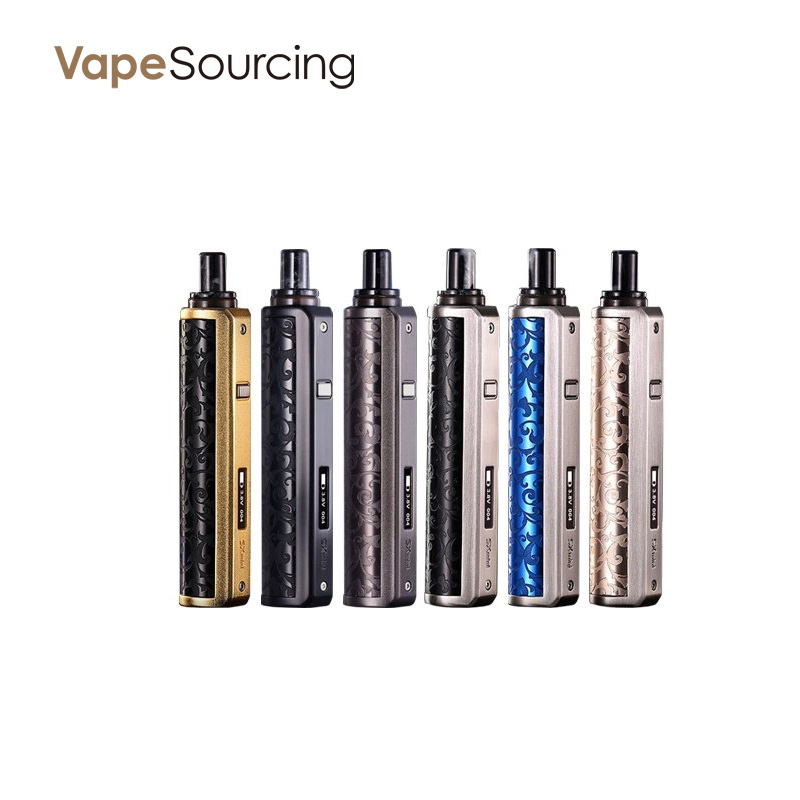 Meanwhile, there is an intuitive OLED display to showcase the battery life, output power, and puff count. As for the pod cartridge, it integrates a 1.0ohm Ceramic Coil for a smooth recreation of flavors and is capable of threaded top-fill via resin MTL drip tip for the 1.8ml capacity reservoir. In my opinion, the Mi Class is really a marvelous masterpiece!

Then is the Eleaf Elven Kit. Formed from zinc-alloy, it is enveloped in a soft metallic satin finish, making for a strong and sturdy chassis that is moderately impact resistant while maintaining a visually striking design. Incorporated within the zinc alloy chassis is a 360mAh rechargeable battery, lending plenty of power to vaporize nicotine salt e-liquid within the 1.6ml pod with the integrated 1.6ohm coil. 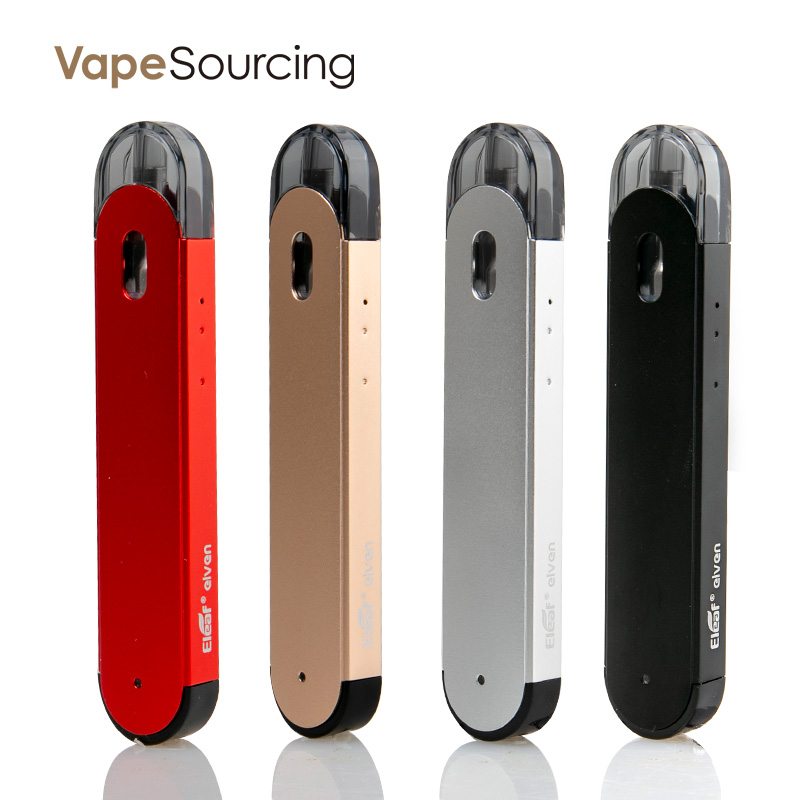 In addition, the Elven upkeeps the sleek design with a button-free layout, unhampered by screens or buttons, instead relying on an advanced draw activated firing mechanism. And the detachable pods are refillable, accessible via side refill port that is stoppered by a leak-proof silicone plug. Dependent on how they are inserted, the Elven offers differing airflow restrictions for each side of the pod. Perfect for those on-the-go and looking for a discreet but practical pod system, the Elven is a potential candidate.